TrustedCTOPosted on December 17, 2016 Posted in community, DIYIT, networking, save money — No Comments ↓
Bluetooth is limited in distance to connections a few feet away.  Some devices claim 30 feet but that is optimal conditions and will definitely start to hiss crackle and pop as distance exceed 15 feet or when a person or wall interferes in-between.
Sonos is one of the most successful brands to use your existing WiFi to interconnect devices to fill the house or office with music from the same smartphone or computer.  Connected speakers can be spread further apart and maintain better reception because WiFi Travels much further than Bluetooth.  However, Sonos only interconnects with other expensive Sonos brand devices.   The good side is the WiFi  allows you to connect and balance many more speakers than bluetooth but each device is expensive and there are very limited choices of high cost devices.
There are other proprietary WiFi audio brands like Visio but they don’t connect to competing brands like Sonos.
Enter DTS Play-fi based on an open source standard it allows 20+ different brands of WiFi audio devices to all talk and interconnect to your single mobile device or computer.  For me the most life changing example to date is the Phorus PR1 DTS Play-fi receiver.  Hook it to your WiFi,   Hook the output to any aux input connection, Install the app.  Play music to any and all of your Play-fi receivers or speakers.   All on your WiFi network and all at the same time.  Raise and lower volume in each zone (receiver or speaker) even change sources music sources or songs etc.  Each PR1 is only $60 on amazon while Sonos costs 200-$700 per speaker.
So I was thinking today how cool it would be if Alexa (echo dot etc) would partner with DTS Play-Fi.  A quick google later…,  Hold the phone…  Amazon Alexa is Coming To The DTS Play-Fi Ecosystem In 2017  and Android Headlines confirms  backward compatibility: “no new equipment will be needed for those that already have a device with Alexa software as well as DTS Play-Fi speakers”.   So TrustedCTO knows that with just an $40 Echo Dot and  $60 Phorus PR1 even your ancient 1978 legacy audiophile receiver can become high tech voice controlled and music streaming compatible for about $100.  I feel like finally I was in the right place at the right time. See also related article on Play-fi.com.  OK, back to my original article from November.
Good speaker, superior play-fi compatibility, but the instructions are too simple.
In my 1st Phorus install I configured three Phorus PS1‘s speakers in an eye-doc’s office and was impressed that they can each play the same music simultaneously across different areas of the building from one PC, smartphone or tablet.  I own a dozen blue-tooth devices but was always frustrated with the interference, short distances and the limits of number of  devices that can be connected. 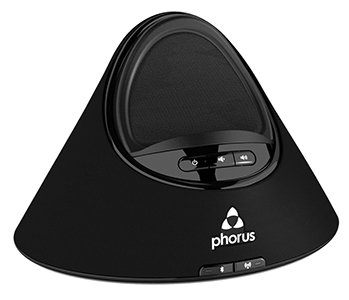 Project 2, My home:  Because I wanted keep my old equipment I interconnected and upgraded each legacy system with a Phorus PR1  Play-Fi receiver attached to some sort of aux input on my old and formerly independent stereos each were 4-7.1 speaker systems.  This  was the best and low cost way to inter-connect several legacy stereo systems to the same  source device.  I can now play all in sync while controlling volume for each play-fi connected system through the device.  Of course this only works when you control your WiFi network.  But the range and quality of WiFi based “DTS play-fi” is far superior and more flexible than bluetooth.  But as a bonus the PR1 also acts as a Bluetooth Receiver.  That made the deal almost too good to be true.
As I loved the concept of play-fi  I decided to unify a whole house system.  At my home I have 5 semi-independent older home stereo’s receivers to unify with 4 Phorus PR1 receivers.  So I can stream or play local music (for example) from my windows 7 PC in the living-room or  several family smartphones and tablets to these 4 PR1 Play-Fi receivers: 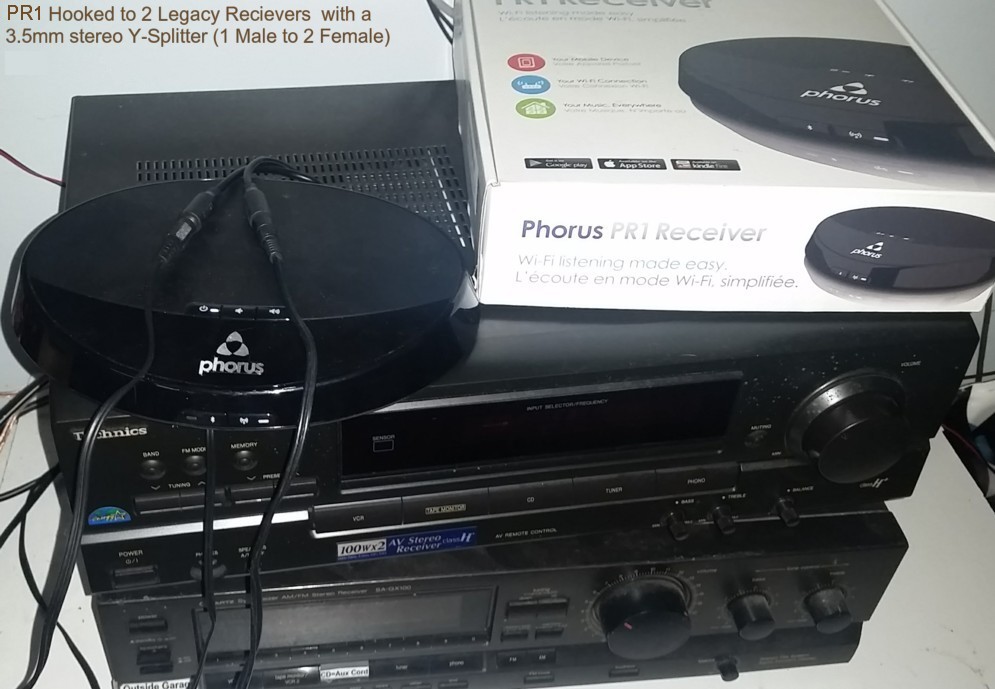 Talking to Phorus tech support, I found that the Phorus RS5 ($150 on amazon) has better capabilities for multi-room streaming through Spotify’s smartphone app but I am going to save my money and my PR1 system. As with my windows upgrade software code I can stream Spotify to multiple rooms. the savings is about $90 per play-fi receiver
As a bonus this introduced me to the free music service or my Amazon Prime account(s) of which I was aware but had never used despite being a 3 year prime member.  The Phorus app also gives you other music apps but the mos unique is the included free” Internet Radio” choice which connects to every local and non local radio station I can think of and is easy to use too boot.  Way better reception than Over the air plus central control.
The tech world changes quickly so the product’s on the shelf will likely need updates every couple of months.  Some can update automatically while others update manually.  I googled our trouble shooting but unfortunately found a different update.  The result was that we bricked the 1st speaker.  Phorus promised to replace it for free directly or though amazon.
Instructions provided with the Phorus devices are too simple but do not work for older PS1 models on newer networks.  So hopefully they will post improved instructions at some place like:  http://support.phorus.com/hc/en-us  Meanwhile you can call excellent Phorus support at:  (877) 666-4335 Monday through Friday, 9am to 5pm Pacific Time or write support@phorus.com
Music sources that show up on my Android Phorus App:
Amazon Music, Deezer, iHeartRadio, Internet radio, KKbox, Media Server, Music, Pandora, QQMusic, Raposody, SeriusXM, Songza, and Tital.  Have not been able to find my 2 favorites:  No Google Play Music, and no podcast addict.   However if you connect a windows PC then anything that you could play through the speakers can be played to the Phorus system.

Configuring the Devices and Software:

The Phorus device has it’s own branded iOs and Android app but tech support tells me that it is all the same as the DTS Play-fi App (which I installed on my windows PC).  What’s more is that the DTS Play-Fi  app controls any play-fi product no matter which brand it is.  This is significant as  your home or business may need some wired speakers, some battery powered speakers and maybe a play-fi speaker to share the sound with your older legacy home stereo system.  The following manufactures have or are coming out with Play-fi dts products:  Aerix, Anthem, Arcam, Asus, Autonomic, Definitive Technology, Dish, Fusion Research, Hewlett-Packard, Klipsch, MartinLogan, McIntosh, Paradigm, Phorus, Polk Audio, Rotel, Sonus faber, SVS, Wadia & Wren
What to do with the receiver:
How to connect the Play-Fi to the network.
You will need a WPS button on your home router and some luck.  Or it is easier if you have a wireless laptop (PC or Mac)  Tablets might not be compatible until after the network connection is complete.
see also these links which might be hard to find:
http://phorus.com/apps/windows#Features
https://play-fi.com/faq/entry/how-do-i-set-up-my-play-fi-system
https://play-fi.com/faq/entry/no-play-fi-devices-detected?/support/pc_trouble_shooting_1.html
https://play-fi.com/faq/entry/set-up-using-a-web-browser
Phorus PR1 Manual
phorus site has: Play-Fi App for Windows
————————————————————————————————–
an Older model of PS1 speaker box has a little green android guy on the box.  That one needs the 9911 update from here https://play-fi.com/update-991
Once you do the manual update with the Phorus folder extracted to the root of a USB drive then you will have the option to do a second automatic wireless update that will take a while so make sure you phone is plugged in to AC power.
Newer phorus PS1 boxes have no green on the box but a have some blue on the black and white box.  New versions of the Phorus devices set up more easily as they do not need you to transfer software with a USB drive.